Today’s post is a writing challenge. This is how it works: participating bloggers picked 4 – 6 words or short phrases for someone else to craft into a post. All words must be used at least once and all the posts will be unique as each writer has received their own set of words. That’s the challenge, here’s a fun twist; no one who’s participating knows who got their words and in what direction the writer will take them. Until now.
My words are: disguise, darkness, treats, street, thankful
they were submitted by: https://dlt-lifeontheranch.blogspot.com/
If we are friends on social media, you might have already seen the bones of this post there. My birthday was on sept 26, and with my dad having been buried on my birthday, every year it's a lot. i spend too much of it reflecting on difficult things, honestly. but i wanted this written on my blog, so I adapted it for this post. thanks for reading.
_________________________________
Sometimes I wonder how I turned out this way-- far left, outspoken, loudly queer, and nonreligious. I wonder how I could've grown like a dandelion in a sidewalk crack, flourishing despite the madness of everything around me, despite everything that tried to kill me, in spite of those things. How did I find my own way in bumfuck, georgia? So many people I know walked around in disguises to fit in, and I never could not when it came to being proud of who I was. How did the queerness peep its lovely head out and never stop pushing for the beauty of a life outside of the darkness? How did it find just the right bit of brokeness in the sidewalk that was my outer shell and break it wide open?

Maybe it was my dad...which is hard to admit since I hated him for so long with everything I had in me.

I've talked at length about how being a kid was for me. I've reaped the benefits of analyzing, publicly, The Things I Went Through shining a light on the abuse and the drug use and the Trauma™ and young me fighting for life and wanting to die all at the same time. It's kinda cliche but his dying left a lot for me to figure out with zero closure. I'd hold up a bit of myself to the light and wonder if these characteristics were tricks or were they treats? Somewhere along the way I realized this person, my dad, gave me so many trauma responses and complexes AND some of the things of love best about myself.

We're country folk. Rural is a word people might use, but rural doesn't encapsulate the experience of the vastness of land and cows and coyotes and the relative absence of people. I grew up on a plot of land and a house my dad built himself with the help of friends and with some of my grandparents' money and the rest he got from selling cocaine. That land was bordered by a pair of dirt rows and a couple fields. You had to travel a few miles to get to paved road that even still really couldn't be called a street. Two cars couldn't fit without rolling on someone's yard a little. Land still yet untamed especially when darkness fell much like this man that helped shape who I would end up being and wanting to be.

I still meet people in the area--Im still in the general vicinity--who knew him and regale me with tales of him being the first person to have consistent supply of coke for these kinds of folks. He was the man to go to if you needed a fix, and it didn't matter too much what it was. If he didn't have it, he could probably get it. Look at that hairstyle and tell me they're lying. 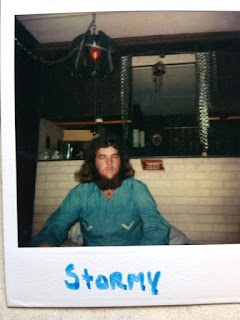 My grandma told me stories about him hating school, about getting in trouble...about how she found a weed plant drying out in her backseat and just drove on to town to get groceries anyway, about the first time they got an antenna installed, and she had to ask the man to leave because when she went to check the shop roof by ladder, she could see the pot plants up there before she even made it to the top.

This cop hating, moonshine distilling, weed growing, coke selling, shroom loving, hairy son of a bitch raised me, and I reckon it shows. He defied standards and expectations. He broke the law when he wanted to make a buck or to have a little fun. He did everything in his power to not be his parents--country folk who pretended they weren't, perfectionist walk-the line parents, "what will people think" parents. Amazing to think someone like my dad could come from that.

I know how it must have felt all those years.

He fucking sucked at being a good father, but he did show me how to carve my own path and laugh in the face of anyone who stood in my way. I learned from him when to harden myself against a world that wanted to break me even though I had to learn on my own when it was ok to be soft. He taught me that laws aren't always just, that cops can't be trusted, the best wine comes from grapes you grew yourself, and corn whiskey ain't good unless it's made illegally at 3 a.m. on your carport while your kids pull peanuts off the plants you took as part of your payment for welding some shit on a farm. He also had a day job.

Sometimes I struggle with the memories I have of the man, but the older I get and the deader he is, the more I can separate him from the nightmares and appreciate what I did have instead of longing for what I didn't get. We buried him on my birthday in 2006. It's impossible to separate my birthday from my dad, and for the last couple years at least, that hasn't been a bad thing. Sometimes I might get to thinking I'm not so broken anymore.

Just gonna lean into it and be thankful I had someone to teach me to be my own person, always.

Email ThisBlogThis!Share to TwitterShare to FacebookShare to Pinterest
Labels: abuse, baking in a tornado, blog challenge, essay, like father like daughter, nonfiction, parent, personal essay, use your words