A New Kind of Blue

My words are: lively, hop, hands down, give an inch, popular. They were submitted by: http://berghamchronicles.blogspot.com

The day before Trump was inaugurated, I lost one of my furbabies (I wrote about it a little before). I’d had Cap since he was just 3 months old, and, at 10 years, he had lived a long, full life for a great dane, but neither of us was ready to say goodbye. Life had other plans though, and after a short battle with a mysterious illness and a 2 year bout with cancer, he took his last breath here at home getting love until the end. It has been (and still is) a devastating loss. Even with all the pets I still live with, the house felt empty. A dog that large with that huge of a personality makes his place in a home. He was part of the family, 100%.

That hurt really took its toll the way that only grief can, and life sort of lost whatever luster it had left especially with Trump taking over, the insanity of our current government, and other life troubles I dealt with at the same time. I was overwhelmed by everything, but not having Cap here to listen to me bitch about it while he looked up at me with those big browns and begged for “rookies” (Scooby doo speak for cookie) left me shattered and feeling those first tendrils of depression taking hold pulling me into the dark.

And then by a small miracle I happened to look on a swap and shop page on Facebook and found an ad for 10 week old great dane puppies. It wasn’t much of an ad--seriously just a woman without a profile picture commenting that she was posting for friends. She didn’t have any idea of the cost (usually this breed is reeeeallllllly expensive, like way out of my cost of living) or how old they were or any details, but she left the number of the owners, and I took a screenshot of it while I mulled over what to do. I mean, let’s face it, buying a dog versus adopting is irresponsible as it is, and my household needs another dog about like we all need lobotomies, but everyone here was hurting, and every dog deserves a good home no matter whether you pay money or adopt one. I know I am justifying here, but every other animal in this house has been rescued and often nursed back from being extremely sick. Just ask my cats. Also, if you have ever been around a dane or live with one, you know there is really no substitute for the giant lap dog mentality and clumsy goofiness, so I figured I would reach out just to see…there’s no hurt in asking, right?

Two days later I traveled down to their house and brought home our new addition, a blue dane we named Rost. Of course I did.

I don’t think I can put into words how much this not-so-little, lively bag of elbows has lifted our spirits. He isn’t Cap by any means, and that’s okay. It’s not a competition or a popularity contest, and I try my best not to compare them, so in no way has he completely erased the hurt and loss I have felt the last couple months, but there’s a new levity here filled with laughs, floopy lips, and doofy ears.

Part of the therapeutic nature of this whole thing is how much attention the little shit requires. Haha. He is absolutely a handful. With him, you absolutely cannot give an inch. One minute you’re folding clothes and the next he is running out of your room with your favorite plush owl in his jowls. Give two dogs the same chew toy and he will throw a tantrum because he wants both. He also throws tantrums when you disturb his sleep or walk in the kitchen (because he doesn’t like the floor and won’t follow you), when you pay attention to anything but him, and when you make him complete commands before he can get a treat. He is a great dane through and through with all their weird, breed-specific idiosyncrasies, but he definitely has his own personality.

He’s been here 6 weeks and in that time, he has mastered about 8 commands, learned to walk on a leash, and potty outside. There is no end to my delight when we’re working on commands, and he hops back into “sit” with those ears still flapping. And the other animals have really taken to him, especially my old dog Georgia. She has played more and gotten more exercise in the past few weeks than she has in months. The two of them are adorable together. Life is adorable, and I’m happier than I can remember being in a while. Hands down, this is one of the best completely irresponsible decisions (out of many, many irresponsible decisions) I have made in my life, and I wouldn’t trade it or him for anything even when he does pretend he hasn’t gotten too big already to lay between the couch and coffee table on top of my feet. These days I cry from laughter far more than the empty weight of loss, and that’s no small victory. 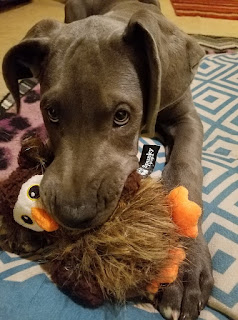 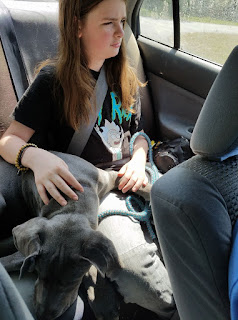 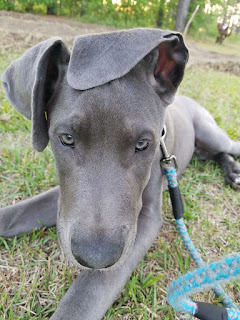 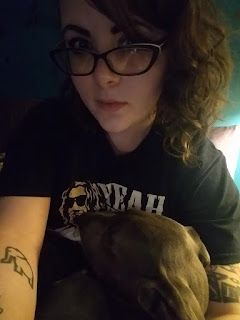 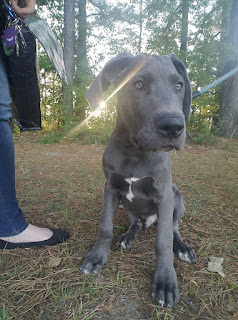 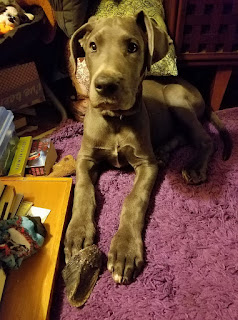 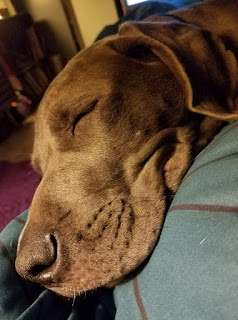 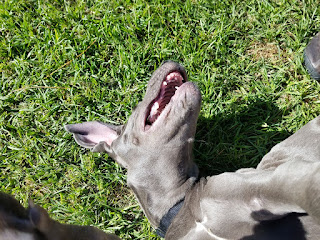 Links to the other “Use Your Words” posts:

Baking In A Tornado http://www.bakinginatornado.com/2017/04/cookies-or-jail-use-your-words.html

Not That Sarah Michelle http://notthatsarahmichelle.blogspot.com
Posted by Jenniy French at 10:00 AM 1 comment:

Thanks But No Thanks

My “Secret Subject” is:

You discover you were switched at birth with someone who is now famous. What do you do?

It was submitted by: http://kimberlyyavorski.com/whenigrowup/

What ifs are dangerous.

Those little creeping thoughts bring with them quite a bit of existential anxiety. You start with “what if” and end up with “I should have…” and pretty soon, instead of actually looking at what you have in front of you or what you can actually accomplish, you get caught up in all the things that could have been had you just made a different decision.

It’s a recipe for disaster—a base of what ifs with 2 cups of shoulds and a half a teaspoon of vanilla extract whipped until creamy pretty much always leaves you with some frothy, peaked existential dread. And, I’m not about that life.

Albert Ellis based his entire psychological theory and career on the idea that living in the past and reflecting on what could have been or where a person “should” be at a certain stage almost always leaves you feeling inadequate, incomplete, and with a host of issues. The point of his kind of therapy is figuring out there really isn’t a scorecard for being a successful human being. Even the definition of personal success varies from person to person. So what if a high school friend was married with his own home and a money-making start-up by 30? What the fuck does that have to do with who you are and what you have accomplished? I certainly try not to compare myself to others on social media that way. Social media has been a contributing factor in anxiety and depression lately because humans, in general, have that tendency to compare in order to judge our own path and with social media you rarely ever see more about that person than they want you to see making your Facebook timeline the ultimate competition. And, for what? No matter how many pics of her smiling baby Jessica posts or pinterest projects she wants to do, we all know she’s changing shitty diapers and banging Levi, her own version of John Bender, even though she’s still married to Brad.

I’m okay with the fact that I’m 35 and still stay up to 5 a.m. most days. So does my child. We’re backwards. We have our own schedule, and I don’t even get a fuck that we get judged for it. No, I didn’t meet the goals I set for myself when I was 16, and I’m finally understanding that it’s perfectly fine—I’m not even close to the same girl I was then. How can I expect myself to want the same things? Life happens and sometimes you just have to roll with it instead of pushing hard to get back where you were. It’s a Sisyphean effort at best. Life is going to fucking bowl you right back down that hill first chance it gets, and there’s not a helmet or knee pads in sight.

What would I do if I found out I had been switched at birth with a celebrity?

Pretty much a whole lot of nothing.

I know what it wouldn’t change. It wouldn’t at all make my childhood any different. It wouldn’t change the man I was raised by regardless of if he was my actual father or not. It wouldn’t change where I was when I was raped at 13. It wouldn’t take that pain away. It wouldn’t take any of the hurts away, and in reality, someone had to go through that. One of those babies would have lived my life regardless, and I know after living it that I was strong enough to make it through mostly sane. Switching lives wouldn’t automatically mean I would have had it any easier or that I would have ended up famous myself. Would it mean I might have more money than now? That the struggle would be less? Maybe, you know, and I can’t help but yearn some nights that I come into some unforeseen nest egg that leaves me less concerned, but what would I trade for having a little more money? What sorts of struggles would I face that I don’t have to worry about now?

Just leave me with my quiet life. Yes, it’s been hell. But I’m pretty happy standing at my kitchen sink watching the dogs play in the backyard at 5 p.m. still in my pajamas with coffee cup in hand. I’m ok. Some days I’m more than ok. And, I really don’t want to imagine myself anywhere else than right here watching Bob’s Burgers at 4 a.m. with my son and rolling my eyes at his terrible gamer jokes.

Baking In A Tornado http://www.BakingInATornado.com

Not That Sarah Michelle http://notthatsarahmichelle.blogspot.com

A Little Piece of Peace http://little-piece-of-peace.blogspot.com

When I Grow Up http://kimberlyyavorski.com/whenigrowup/
Posted by Jenniy French at 10:00 AM 5 comments:

Email ThisBlogThis!Share to TwitterShare to FacebookShare to Pinterest
Labels: baking in a tornado, blog challenge, celebrity, famous, I dont need all that, no thank you, no thanks, secret subject swap, switched at birth, you can keep the bullshit
Newer Posts Older Posts Home
Subscribe to: Posts (Atom)