My words were: dog, coffee, remote, denim, cotton, and fake

they were submitted by:

It's a bit serendipitous that I got these words with "dog" included. My little family has had some big changes over the past couple months involving dogs.

In early December, our senior lady Georgia, a chiweenie of unspecified age but definitely older than 15, got sick, needed emergency surgery, and never came out of anesthesia. It happened so fast. She was definitely getting older, but we honestly thought we had a few more good years. She had a lot of energy, still bossed Rost, our great dane, around, had herself a full time cat boyfriend, and was absolutely spoiled. So it was unexpected to say the least. And devastating. It didn't help that we lost another dog tragically in August to a random snake bite that I wrote about for one of our challenges last year. 2019 was not at all kind to our family, and the loss of Georgia felt like the nail in the coffin.

The cats were depressed, howling for her night after night. Rost missed her. And our holiday smiles were absolutely fake. It hurt. And it hurt badly. This was our 3rd pet loss in 3 years (my last great dane in early 2017 to old age), and we were feeling it. Anyone with pets will tell you those losses are as hard as any others--sometimes harder--and the grief involved is very real.

We weren't necessarily looking hard to find another dog. We weren't sure we ever wanted another. But I had scoped out some rescue and humane society pages missing the little tapping paws following me around the house. I had come close to going to check out a couple and even emailed for more information, but in the end, it just wasn't the right time or fit. The idea of bringing another dog in so soon was weird. Georgia's shoes could never be filled.

I did ask my mom to keep her ears open for me. She has a much bigger local network than I do. I hide out in the country and pretty much cut off 90% of people I know locally for my own sanity. But she works for the courthouse and my stepdad owns a bait and tackle/gas station/convenience store type thing (what a combo...get a sausage dog and a bag of crickets when you fill up your tank) and has for a long ass time, so they know a lot of folks. I told her we weren't in a hurry to move on, so she didn't have to go asking around, but it still wasn't even two days later that she sent me a message about a little shih tzu that had been surrendered to her vet by its owner who was too sick to take care of it anymore. Chewbacca was his name, and he certainly looked the part.

I debated on it a few days. The kid wasn't sold. A shih tzu didn't really seem like our kind of dog, but he certainly looked so differently from Georgia, and that would help ease the pain of comparisons. A couple more days passed and we found out that someone who was supposed to meet the dog didn't, so we took a chance. The possibility of him coming home with us seemed remote.

But then we met him. 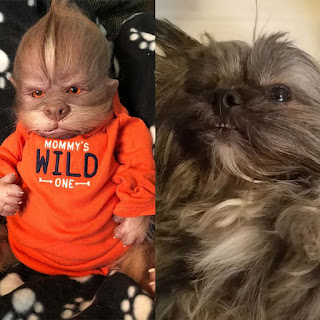 He looks like a little werewolf baby. Long hair with gray, black, and white and sometimes a tinge of brown. He has a little floof of white cotton on his chest and a tail like a feather duster. We brought him home on a week long trial. The first meet with him and Rost went better than expected, but it felt so weird having him here. I wanted to cry but also hug him and never let him go. By the second day though, he acted like he's been here forever, so more or less he cbose us. Even the cats took to him pretty quickly considering he's only been here 3 weeks, and his personality keeps shining out more and more. He plays with us, with Rost. He knows his new name. He weirdly never answered to Chewbacca so we call him Fizz which is short for Fizzgig from the dark crystal. If you know the movie, you know why. Haha. He's trained, never pooped in the house and only had two pee accidents. He's good in his kennel but of course he's already sleeping in the bed all night. 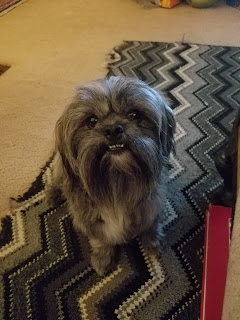 I have my mid morning coffee while he dances around the kitchen grinning with his bottom teeth. He sleeps in the bathroom with the Dane while I shower, and anytime I actually get a chance to sit down, there he is begging to be held like a baby so he can sleep.

Now he just needs a ripped denim jacket that says Teen Wolf. Way better than a letterman jacket. And he'll fully look the part of the household cryptid.

He's certainly no Georgia, but that's kinda the point. There could never be a replacement, so why try? He's got a personality all his own, but one that fits in better than I ever could have imagined, and it's been so little time. I can only see it getting better.

Nothing really takes away the hurt and missing our old lady...but Fizz is certainly making those smiles and laughs genuine as hell, and for that I am so thankful. 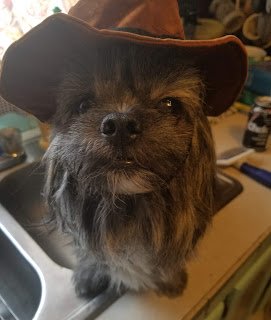 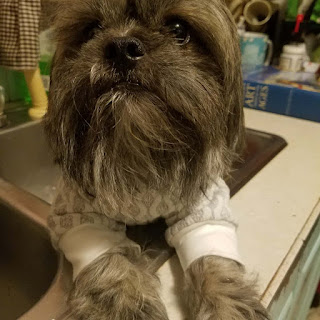 Baking In A Tornado https://www.bakinginatornado.com/2020/02/a-song-raven-and-shrimp-use-your-words.html