The Side Effects of Stolen Innocence

I never had the opportunity to have a true, innocent, uncomplicated-by-baggage first love.

That’s just the way the cards were dealt to me this hand, and it’s something that I’ve tried not to dwell on too much, but the facts are that being raped at 13, losing my virginity that way, changed everything. I have no idea what pre-rape sex is like. I don’t know what it’s like to fall hard for someone and make the decision about whether or not to go ALL THE WAY for the first time. That innocence was stolen from me long before I had that opportunity to desperately dwell and overthink that decision and relish in the specialness that comes from sharing that moment with someone in all its imperfect perfectness.

With that loss of innocence comes a lot of bullshit. A lot of emotional issues and physical reactions that affect me as an adult even 20 years later. I’ve loved, surely. I can recall the people in my life that I’ve loved so strongly I thought I would never be able to eat or sleep again when the relationship was over. I can relive with fondness some of the better times we shared and feel a momentary swirl of butterflies when I see them somewhere unexpectedly. I’ve not been in many relationships, and not even all of those were really great, but I know in my lifetime I truly loved and was loved just as fiercely in return. The stark, laid-bare truth for me, though, is that it was never the kind of love that wasn’t tethered by the understanding of what a man could do when “no” wasn’t enough and the primal, unrelenting fear and pain that comes with that knowledge. I have never had the kind of love that is free of that robbery, free of the haunting of an assault that I didn’t deserve.

What I imagine first love to be is sort of like purring bunnies in a field of gummy bear flowers pooping rainbow cupcakes under a radiant boombox sun raining down tasty jams and pulsing glitter all over the place every time the bass hits.

Okay, so maybe I owned too much Lisa Frank shit when I was kid, but either way that image is total 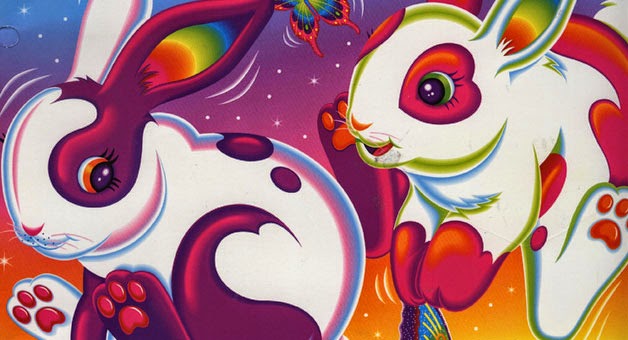 innocent perfection in my mind. Maybe I’m completely off base but that first attempted relationship seems to be more pure than everything that comes after the first gut-wrenching heartache that always follows when you end something with a person you absolutely fall no-holds-barred head over heels for… (and what's more pure than rabbits that eat gummy bear flowers and shit out cupcakes? nothing. not a fucking thing). That’s not to say I think that first love is the best—better than any other relationship you experience in your lifetime, but it’s the only time you start with a clean slate, the only time you don’t bring the good, the bad, and the ugly of every other relationship with you. It’s less weighed down by everything that came before it. In a lot of ways, it’s a fantasy world at least to begin with…people have yet to turn out to be the exact opposite of what you have imagined them to be or break your heart or cheat or lie or fuck with your head. And then when the other shoe drops, it’s perhaps one of the biggest reality checks you face in life.

My shoe dropped before I had a chance to experience the naivety of it all.

I rail on so often about rape culture on social media, in person, on the phone….anytime and anywhere the conversation is appropriate and even when it’s not. The fact that rape goes largely unpunished in our society and that the blame is often laid upon the shoulders of the victim to carry as if she (or he) was not already carrying a heavy load just by way of being victimized means that the big picture of what a person loses and the insecurities a person gains after being raped is ignored. I didn’t suffer a momentary, fleeting fear that resolved itself after the event was over. My entire being was violated and my existence was forever changed while the perpetrator of that death—the murder of my innocence—has gone on to have a life completely unaffected by the fear, the pain, the anger, the shame, and the guilt that has so often peppered the very essence of my being. It has been 20 years since that night, and I still can’t answer the door when I’m home alone without panicking. I never had my innocent, vibrant, Lisa Frank-esque love. I have never been able to set foot in my father’s house without reliving it. And, that will never change… None of it. It’s with me for as long as I live and breathe. We, as a people, have to stop and consider the toll that this takes on 1 out of 5 women (sometimes multiple times) in our lives. Think of all the women you know and how many might have been victims. How many have to live with that memory and all the side effects that come with it? Until we start recognizing how serious the act itself is, how damaging in all manners of life for the length of time the victim lives rape is, it’s always going to be about changing the behavior of the victim because that seems easier…because the act itself seems horrible to the imagination but so few people seem to consider just how depraved and far-reaching it is. Here’s your chance through my words, as vulnerable as they make me here today, to see just one of the many things my rapist robbed me of…. It’s not just a horrible act that can be prevented through modifying potential victims; it’s essentially a murder. The person who existed before the rape is lost and someone almost completely different rises from the ashes of the former self. Like a phoenix with an anxiety disorder and a guilt-complex that keeps it from soaring as high and freely as it could otherwise.

97% of rapists never spend time in prison according to RAINN. Isn’t it time we change that?

And, as always, this is me taking a seemingly light hearted Sunday Confessions prompt and being all preachy about it. That's what I do. But, please check out the rest of the contributions at More Than Cheese and Beer and the always interesting anonymous confessions on the MTCAB Facebook page.

Posted by Jenniy French at 9:33 AM