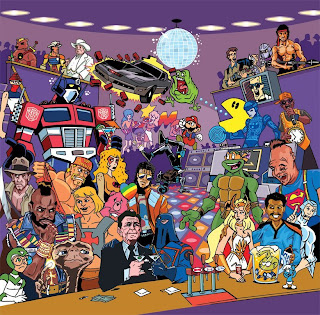 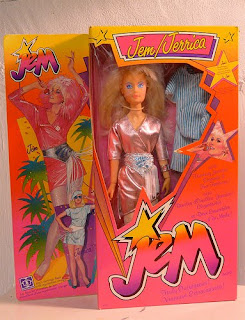 I had a Jem doll.
Jem was one of those shows created around a line of toys (Hasbro) like GI Joe, The Transformers, and My Little Pony. The basic plot of the show involved Jerrica Benton, the main character, having a "secret" identity as a rockstar. By day, she owned a music company and a foster home for 13 orphaned girls. By different time of day, she was Jem of Jem and the Holograms, a rocker girl whose badassness could hardly be rivaled. The shows the band played were used to fund Jerrica's altruistic activities, and she always foiled the attempts of bad girl rival bands like the Misfits out of stealing her thunder. Bad girls, seemingly, never win even in the world of animated bubblegum pop rock...

Jerrica transformed from herself to Jem by aid of a hologram machine and a pair of nifty earrings which would envelope her in Jem's image. And, of course, no girl show is complete without some romance. Why is it that girls are seen as only being interested in boys and love with their toys and shows? I guess that's a longer question for another day. Anyway, in this case, the love interest was actually unwittingly digging on both personalities. What do you do when you find out your boyfriend is cheating on you with yourself?

I also used to have this Barbie style family of dolls called the Heart family. 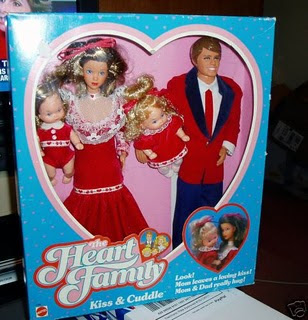 This was cute and gaggingly wholesome fun with a Mommy, Daddy, baby girl, and baby boy. Aw! Or not really aw. Not at my house anyway. In my imagination and in my 3 story dollhouse, Mr. Heart used to have affairs on Mrs. Heart with Jem.

That is correct. Before the age of ten, I made Jem into quite a "homewrecker." That jerk. Or, I guess I'm the jerk. Either way.

Don't let this fool you into thinking something negative about my perceptions of relationships at the time, though, or that, perhaps, my parents' relationship had my views skewed. My parents did get divorced by the time I was 12, but it had nothing to do with infidelity. I'm fairly certain neither of them were cheaters, and in fact, the extent of their problems centered around my father's abuse and drug use. I do have my own ideas about love and relationships now that are not exactly traditional, but at that young age, I don't think it crossed my mind too much. Besides all that, the affairs Mr. Heart had with Jem had nothing to do with the drama of a secret relationship and having forbidden fruit. They snuck around, sure. But, when they did, they mostly hung out on the plastic furniture after she brought over plastic fruit in full rocker costume. She never once saw him in her Jerrica attire. And here's why: in my mind, Mr. Heart simply thought Jem was the coolest girl he'd ever seen.

Jem was something completely different from his American dream family. She loved music and dancing. They listened to Cyndi Lauper and moved around the house singing along. Those style dolls really can't dance well, so moving robotically is as good as it gets. She made up songs just for him and dressed differently than his sweetheart wife. She also did her own thing and wasn't afraid to be an upwardly mobile woman of the 80s. Okay, so my mind at the time couldn't conceive the term "upwardly mobile woman of the 80s," but I knew she supported herself and didn't need a damn dime of his while his wife wouldn't have gotten a job if her life depended on it (and she'd end up living on alimony checks for the rest of her life). Perhaps this is where my parents' relationship dynamic was the influence. To me, independence was awesome. Who wouldn't want the cool girl with her own job who could sing her ass off, had flashy earrings, and dyed her hair pink? Mr. Heart just couldn't resist.

And, that's why the affair began. I thought Jem was bad-fucking-ass, so how could he not see her the same way?

The influence of such a character seems pretty small when your child is watching cartoons on Saturday mornings while you're doing the laundry or sleeping in, but here I am today with that influence still quite apparent with my love of music, self sufficiency, education, tattoos, unique style, and outside the box thinking. Fuck am I ever glad my mom never got the depth of a show like Jem...I imagine I'd be sucking down Xanax in massive quantities right now if my life were anything like that of the nauseatingly domestic Mrs. Heart.

I wonder what would happen if these Misfits were pitted against the real Misfits in a Battle of the Bands....I also wonder who would spend more time doing their makeup. Would it be more involved to tease that pea-soup-colored hair and electrify those cheeks or gel that one strand into the perfect face blocking place?

Posted by Jenniy French at 5:52 PM