Is it too much to ask to spell the word “sandwich” correctly?

Any time someone does not agree with statements I (or any woman really) have made in a debate on any serious topic, it is has become absolutely fair game to say “Go make me a sammich” instead of actually making any factual point in regards to the topic at hand.

By someone, I do mean dudes. There are some things which can be applied to both genders but are so often mistakenly applied to one or the other uniformly. In this case, however, dudes want sammiches instead of sandwiches, and dudes want to avoid actually having to use their brains by shutting conversations completely down with a sexist “joke.”

What’s the difference between a sammich and a sandwich?

We, as in women, need to stop taking this and ourselves so seriously right? It’s just a joke, right? We’re overreacting like women always do, right?

See, what you did there? See how you made a blanket assumption about all women and completely invalidated everything we feel when we hear one of these jokes by using a horribly weak form of gaslighting? Yeah. That sort of turns this whole joke thing into exactly what we thought it was to start.

When someone uses a hostile form of humor to jab at someone else because the joker doesn’t happen to like what that someone else says, it’s not really a joke. It may be an attempt to bring humor into the situation, but it’s more or less at least a half truth meant to ruffle feathers in an effort to dominate the conversation in a way that makes the joker more comfortable. It is meant to make the person feel subservient. To put her in her so-called place. To point out that this is no conversation for the likes of her so she should get back to the kitchen while the men hash things out.

You want a sammich?

Your bad relationships are your fault. There are awful people of both genders out there, and the fact that you have chose, often, to fuck around with immature, ignorant women is not the fault of all women nor does it define all women. You only have yourself to blame for your choices.

The friendzone is a fallacy. It is your mistaken belief that if you want to fuck a woman, she is obligated to want to fuck you back. It is your idiocy that pushes you to believe that being nice to a woman until she refuses to sleep with you or date you makes you a nice guy. It is completely ignorant to assume that just because a few women actually value your friendship more than your dick that women, all women, only want assholes. If we wanted assholes, we’d be fucking you. Because when you are only nice to try to get into someone’s panties, YOU are the asshole.

Feminism is not your enemy. To think that just because a woman wants equal rights and equal pay, she actually wants to walk all over you and rise above men is ignorance. Do your research. Don’t you understand that when these outdated views of women as weak and as primarily mothers changes, that real strides can be made in arenas where men’s rights activists now work? When it is seen that men and women are both solid parents, men will not have so many problems getting custody of children when it is warranted. When women are not seen as too weak to be violent, men can make a real case for domestic abuse and/or rape. Feminism is not, in any way, synonymous with misandry. Do some feminists hate men? Sure. But, some feminists ARE men. Those men are informed enough to realize the scope of the issues.

At no time does your joke improve situations. Perhaps you have a steady relationship with your hand because you keep on making these jokes thinking that it’s going to get you somewhere. Perhaps the only choices you have are insecure girls who overlook these jokes or even, sadly, believe them and who subsequently do have stability issues. The truth, simply, is that no educated, confident woman wants to get into an intelligent conversation with a man only to be shut down in the middle of a controversial point by being told to time travel back to the fucking 40s and 50s. That, dear sirs, makes a vagina more arid than the fucking Atacama Desert. You’re not getting laid often because your jokes tell us you have issues with women. When you do get laid, it never turns out well because anyone with even a modicum of self-respect and a decent level of self-awareness would never, could never stoop to such a level.

I would gladly make a sandwich for my lover. I love to cook for someone. But, you can make your sammich filled with self-hatred and regrets. 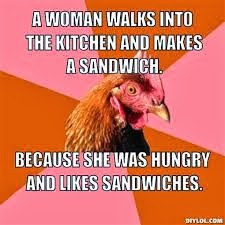 Posted by Jenniy French at 9:09 AM