I’ve been on dating sites for a number of years now. I’ve never expected to meet my one and only true love on these types of sites. Some people do. More power to you on that. You found a needle in a haystack the size of the Empire State Building. It’s really quite an impressive feat. For me, though, it’s been good for meeting a few good friends and more than a few good laughs. After years of experience, I can safely say that the people to stay away from, the red flags, far outnumber the interesting, decent guys. You want to avoid these guys at all costs:

1. The Whiner—You might be able to spot The Whiner right away. He’ll have something in his headline, perhaps, about how he’s about to delete his profile since no one responds anyway or he’ll whine that there’s no one real on these sites. In the text of his profile will be a lot of complaints about how many women he’s been out with that turned out not to be who they say they are or any number of whiny issues that make you roll your eyes hard enough to risk them popping right out of your fucking skull. The Whiner always wants a woman to be honest with him but then when she is, he whines that he didn’t get his way. It’s a never ending circle of whininess that really leads nowhere at all much less to Sexville or even to a first date for fuck’s sake. If he messages you for any length of time, eventually you’ll hear all the whining about how he’s really a nice guy, and he’s always in the friendzone. Look, whinebags, our vaginas instantly become more arid than the Sahara Desert as soon as you whip out phrases like “nice guy” and “friendzone” especially since we were already treading on dehydration from all the whiny ass bullshit to begin with. It’s absolutely not attractive to listen to a guy whine about how women aren’t just falling into his lap. Get the fuck over yourself already. You aren’t entitled to any woman’s vagina. You aren’t entitled to sex. Recognize that fact.

2. Abs Guy—This is the guy that always has a bathroom mirror pic with his shirt pulled up or completely off that only shows his very muscular midsection. His profile talks about how much he loves to work out and says very little else if anything at all. The messages will either be indicative that he never read your profile such as “hey wanna chat” or “ur hot” or be some sort of attempt at describing in detail what he would like to do to you. All in all, the messages and the profile are indicative of the guy having no brain which is probably why he put his abs on the profile pic to begin with. Those are probably the most functional part of his body, dick included.

3. The Pick Up Artist—Let’s just get things straight right from the start. This guy is a major misogynist. He might be a frequenter of men’s rights forums, but he’s definitely read a thing or two about how to pick up women because, as he will bluntly tell you, all women like to be treated like shit, love bad boys, and adore assholes. All women should, all women need, blah blah blah blah blah. It never ends. He starts out the messages with something obviously negative. Sometimes, it’s a comment such as “You have great lips, and I guess the rest of you isn’t bad either.” If you reject him, he instantly tells you that you’re a fat, ugly bitch and that he didn’t want you anyway. If you don’t respond to him, he messages you to ask you why you’re scared. His entire tactic is about making you look bad or weak because that’s exactly what he thinks of women in the first place. 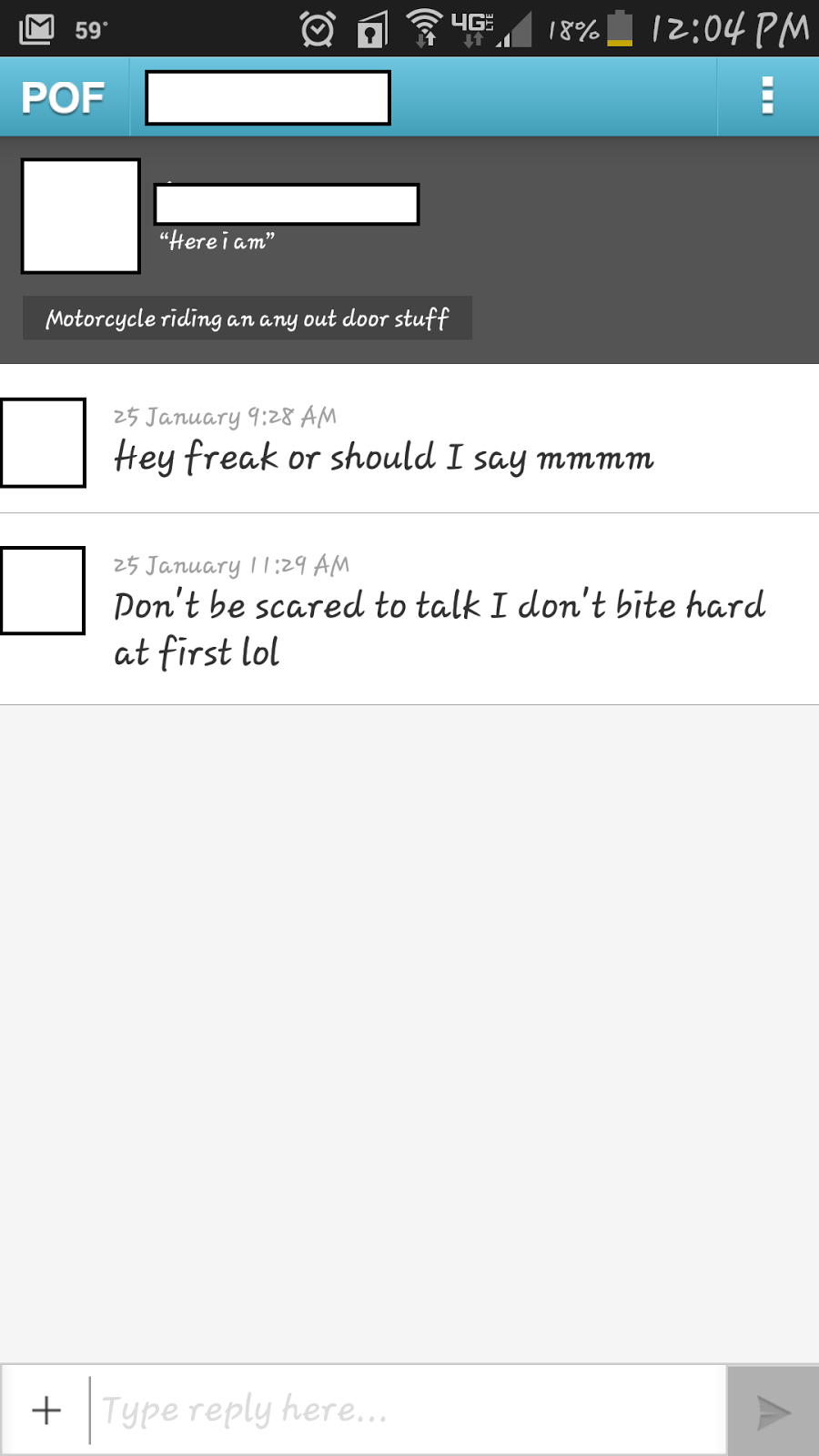 4. Loverboy—This guy is looking for love and he doesn’t even care who its with honestly. He likely jumps from relationship to relationship because he definitely mistakes crushing and lusting for someone as love. He doesn’t read anything at all about what you’re looking for on your profile. If, for example, you say that you want to date casually or are just looking for friends and short term dating, he will message you about looking for his soulmate. To him, you don’t know what you want. He’s not necessarily an overt misogynist, but he firmly believes that you just haven’t met the right guy yet and that no matter what’s going on in your life or where you are or what you want, if you just give him a chance to show you what “real” love is like, you’ll totally change your mind. He also wrongly assumes that the only reason you aren’t looking for a long term relationship is because you’ve been hurt by other men which he promises in message 2 never to do to you because he can talk to like he’s never talked to anyone before. Ever. Just be careful or he’ll end up watching you outside your bathroom window while you shave your legs. 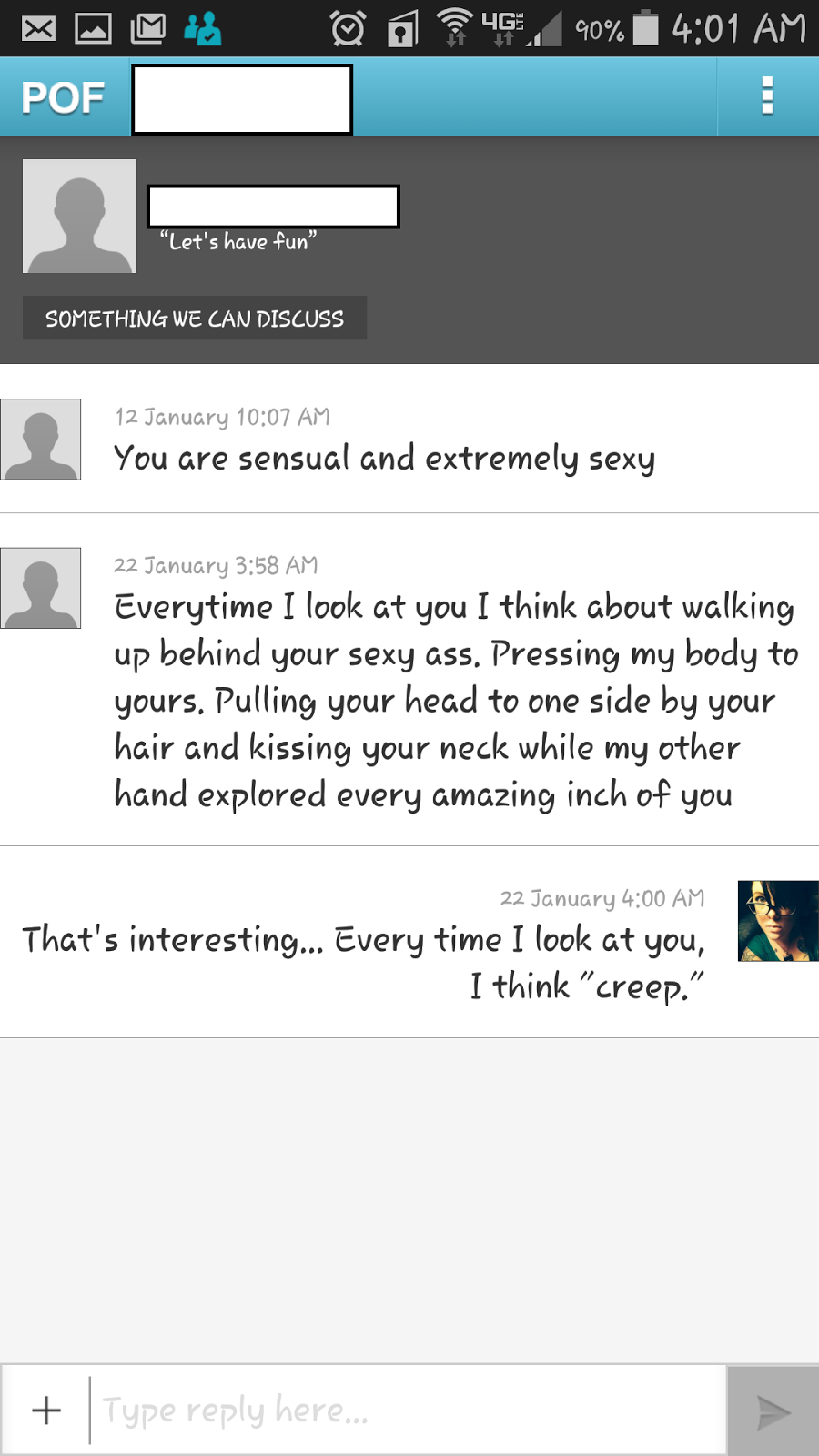 exactly what he would like to do to your body. He doesn’t think of you as a person at all which is where he differs from The Pickup Artist. The Pickup Artist knows you’re human but by way of having a vagina you’re a lower form of human than anything with a dick. The Flasher completely ignores your personhood. Instead, you’re a tool for getting off. Much like the weirdos who have exhibitionistic paraphilic disorders who flash their sad, flaccid wee-wees at old ladies in grocery store parking lots, these guys are only in it for the thrill of showing you what’s under his metaphorical trench coat. He knows when he sends you the message that you’re not going to respond favorably to it, but he’s already jerking the gherkin when he hits the send button anyway just imagining your face when you read it, so no worries there. Women on dating sites are the equivalent to a Kleenex to these dudes.


6. Creepo—This guy acts like there’s no reason why you shouldn’t feel unsafe to meet him at his home. He offers to let you hang out with him in his very first message before you even know his name and even tells you he’ll be happy to supply the alcohol! He thinks it’s a nice offer and if you protest, he’ll assure you, like so many others, that he’s a nice guy and that there’s nothing to worry about. Yet, here he is offering to ply a complete stranger with alcohol at his apartment without even knowing if you drink. Something’s wrong with this picture. People who meet men on dating sites without vetting them first are often being raped and murdered. Craigslist killers have been fairly commonplace. And you’re just supposed to go get drunk at a complete stranger’s house with no concerns because he reassures you he’s not the creep you think he is. This is the same guy that will often refuse to meet you in a public place first because it’s just too inconvenient or he doesn’t really have the time. STAY AWAY or you could very likely end up having to file a police report if you even live through the date at all. 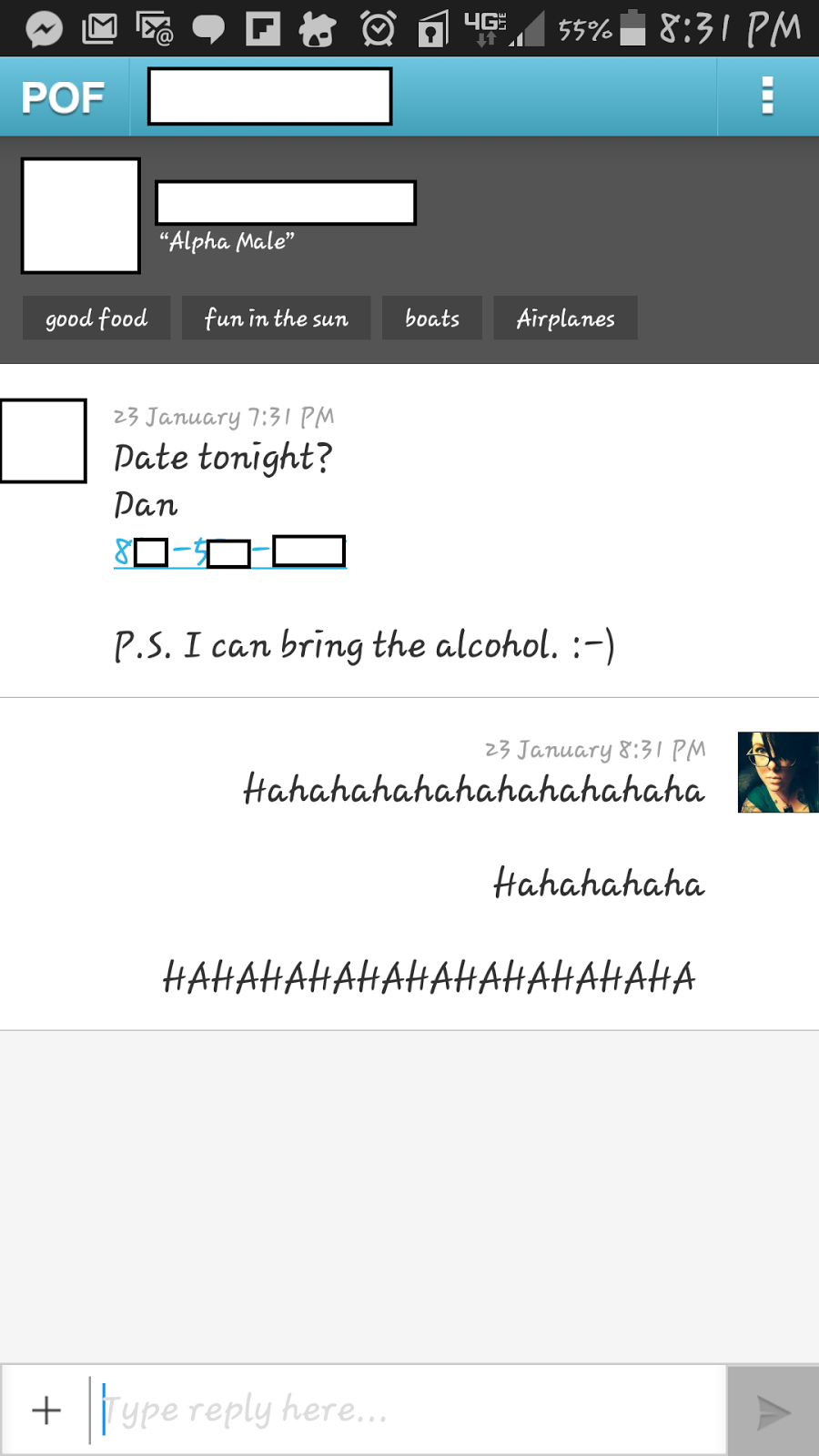 As you can see, none of these guys are good news. You're better off cutting out your own heart than ever consider even so much as replying favorably to one of these guys. Do yourself a favor and RUN whenever you find them in your inbox.

This has been another Sunday Confession with More Than Cheese and Beer. Check out the other linkups over on her blog and the Facebook page for anonymous confessions.

Posted by Jenniy French at 5:23 PM