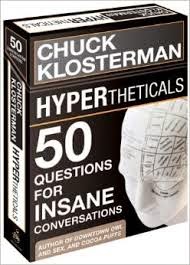 I have this boxed set of questions written by Chuck Klosterman called Hypertheticals: 50 Questions for Insane Conversations. I've used them at parties before to try to spark interesting conversations, but it so rarely sparks the intense debate I hope to have. Klosterman said of these questions in Sex, Drugs, and Cocoa Puffs that these were the things he would have to know about someone before he could love them... And, I can see why. If a person can really open themselves up to mulling them over and all their possibilities, you can really get to know the way a person thinks, how they process a problem, and ultimately more about them overall. If they won't even bother to open up to the discussion at all, then what's the point, right? Right. Or something like that.

So here's our question.

You are forced to give up one of your five senses (smell, sight, taste, touch, or hearing). However, you may choose to compensate for that loss by means of synesthesia. For example, if you decide to give up your sense of sight, you can choose to smell colors instead. Or if you give up hearing, you might opt to taste music. If you give up taste, you could replace this sensation by hearing flavors. Basically, whatever sense you reject would be reflected through an alternate medium. Which of your senses would you surrender, and how would you replace it?

You have to really be careful with this. It seems obvious that you wouldn't want to give up the sense of touch. Sex, love, romance....none of that would be the same. Being a parent would be different. Those comforting hugs that you need on the shittiest of days would suddenly mean less. Kitten hugs and playing with the dogs... Even being out in the sunlight laying in the grass reading a book.... I hate to make assumptions for people, though, so I'll say that I could never give up my sense of touch.

So that leaves us with taste, sight, hearing, and smell. It gets trickier.

Personally, I could never give up hearing. The power of music is such a driving force in my life, that the very idea of deafness is akin to suicidal ideation. I have this tattoo on my leg, a quote by Woody Guthrie, that says, "There's a feeling in music and it carries you back down the road you already traveled and makes you travel it again. Sometimes when I hear music, I think back over my days and a feeling that is 50/50 joy and pain swells like clouds taking all kinds of shapes in my mind." So much of my memory is tied to songs, artists, albums, genres. And what are we without our memories, without pasts and colorful histories and stories to tell? To give up music by giving up hearing would be to give up much of what makes me, me.

If given the choice between sight and hearing, I always say sight because I couldn't possibly give up music. Given other choices, though, there's no way even with the synesthesia addendum. For one, as shallow as it is, the way I dress and apply my makeup is an important mode of self expression for me. Without sight, I'd be giving that up. I'd have to completely depend on someone else to express my personality for me or find another way to do so and given how introverted I am, it's doubtful I could do so with words alone. But even more than that, I love the sight of the world around me. Perhaps it's not as powerful as music in my happiness, but it's still high on the list. The beauty of a pink-orange sunset on the South Georgia horizon is humbling. It puts things into perspective at times and fills me with this radiating calm like almost nothing else can.

Smell and taste. Now it's next to impossible.

When I was pregnant with my son, my sense of smell was magnified. It happens in pregnancy at times. I was working in a pharmacy and the odors some people emitted were so strong, acrid, vulgar that I would have to run for the bathroom as quickly as I greeted them. It was terrible. But, could I give up all smells in favor of seeing them or hearing them or some other synesthetic replacement? I don't think so. That sweet, clean smell of soap on skin when you get close to someone is such a rush. The smell of Jasmine any time of day is so soothing and puppy breath makes me smile. Fresh cut grass on a hot day. The bacteria-created heavy scent of a recent rain. Honeysuckle blooming in the spring. Besides, who would want to get visual, audio, felt, or tasted sense of what a person is smelling? I mean...I have a great dane who is really a farting torture machine disguised as a dog. Smelling it is bad enough, but what sort of audio or visual would accompany such a stench? I don't even want to think about feeling or tasting it instead. *shudders* Ultimately, when it comes down to it, I just dont think I could give up the wonderful smells....baking foods, vanilla, old books...just because some horrid ones exist.

So that leaves taste and perhaps I'm the only person that would look at it this way.

I think I would give up taste as I know it now and replace it with visuals. I have a love-hate relationship with food as it is from years of self-esteem issues and an eating disorder. I don't turn to food for comfort or stress-eat, so I don't think I would lose out on much if I no longer tasted anything. It might actually make it easier to eat even healthier. But on the occasions that I had some rich caramels or a decadent cupcake, imagine the visuals--soft, creamy colors blanketing everything. Sour candies with vivid colors or fluorescent ones peppering the air. It could be pretty fucking awesome...like being on LSD all the time without the side effects every time you eat, and I'm down with that.

Leave me all the feels, smells, sounds, and sights. I'll give up taste. What's your answer?

This has been part of Sunday Confessions with More than Cheese and Beer. Check out hers and all the other posts this week. I bet no one else's is about synesthesia, but I'm sure they'll be interesting nonetheless.